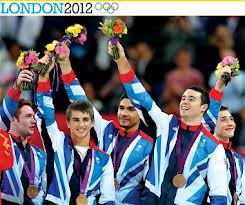 I never thought I would be so excited about the Olympics. It all started with the wonderful opening ceremony which most of us agree was just brilliant.   I loved the journey that Danny Boyle took us on.

When the Olympic rings were raised above the stadium it was hard not to be moved.

I have also found myself watching sports that I wouldn’t normally be interested in and noticed that they all seem to have one thing in common – the slim margins between success and failure.

Last night I was watching the men’s team gymnastics and am so proud that Britain received its first gymnastics medal since 1912. What an achievement.

How the team was able to hold their nerve under the most enormous pressure with a highly vocal and expectant crowd in the background is frankly beyond me.

We jumped with joy when we heard that they had secured the bronze and went crazy when this changed to a silver medal.  Then… we held our breaths as the judges reviewed the points for Japan which would determine whether the team would hold on to the silver medal or revert to being awarded the bronze.  It was a nerve racking few minutes and we had fingers (and toes) crossed as we waited for the outcome.

We also had to spare a thought for the Ukraine team as they were in danger of ending up without a medal at all.

As the commentator said it went “right down to the wire” and with just a slight revision in the points awarded to Japan everything changed.   Japan was awarded the silver, Great Britain the bronze and Ukraine lost out all together.

It was desperate to watch the faces of the teams as they waited to hear the results.

What are some small changes that you could you make in your business today that can be the difference between success and failure?

I’d love to hear your thoughts.