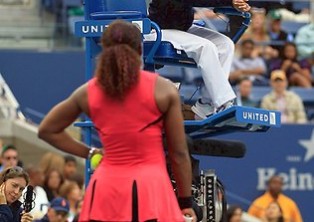 Was Serena Williams’  outburst at the US Open finals about passion and determination to win or something else entirely and what can we learn from it?

As an avid tennis fan I have been watching the US Open – even if it means staying up until the early hours of the morning.

There weren’t too many surprises, except the long suffering British fans had high hopes for Andy Murray as always.  Maybe next year Andy?

What really fascinated me though was the progress of Serena Williams.  Miss Williams is one of the most celebrated professional tennis players of the early 21st century. Sheentered the ranks of that sport alongside her older sister Venus. The two did so thanks to their dad, Richard Williams, a one-time security company owner, after learning the sport himself via instructional videos.

Serena’s records included winning eight Grand Slam singles titles an Olympic gold medal in women’s doubles, and she also made international headlines by signing a $40 million endorsement contract with Reebok – one of the highest such contracts in all of women’s sports of all time.

Serena later began an acting career, with television appearances on such series as The Simpsons, Law & Order: Special Victims Unit and ER. She also was a stock-car driving participant in the competitive reality series Fast Cars & Superstars.

Most people would consider this to be a glittering and successful career and we all love a ‘rags to riches’ story. Many young women and men, therefore see Serena as an inspiration and role model to emulate.

Having recovered from major injury she was seeded 28th at the US open.  She pounded every opponent into submission on her way to the finals and ended up as everyone’s favourite to win the title.  Her determination and ability to overcome adversity is certainly something to be admired.

After a poor start and losing her serve twice in the first set, she was broken again on game point in the second when she scream out just as she hit the ball.  Her response was anger – perhaps acceptably, but when she continued to argue with and harangue the umpire I questioned whether this was a display of passion and determination to succeed or something else altogether?

She went on to lose the championship, leaving everyone questioning what happened and why she didn’t play as well was expected.

I am left asking how someone who is so driven to succeed, has overcome major obstacles and achieves despite the odds against them and who many see as a role model, can end upbehaving the way she did?

While I will never have the answer to the question as Serena isn’t someone I know personally, it confirms to me the importance of emotional intelligence and need for us all to manage our emotions effectively.

In complete contrast to Serena, Sam Stosur remained calm in the face of enormous pressure.  She stuck to her game plan, managed herself and woke up this morning with a US Open Title and $1,800,000 in her bank account!

If you would like to learn more about Emotional Intelligence and its impact on performance, we are offering 10% off our EI assessments until 30th October 2011.  Call us on 0191 266 4626