Are You A Psychopath? 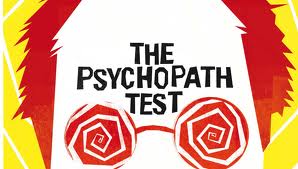 “About four per cent of people with substantial decision-making power can be classified as psychopaths.”

According to journalist Jon Ronson, author of “The Psychopath Test” “high-scoring psychopaths can be brilliant bosses but only ever for short term…they always want to make a killing and move on.”

What is a psychopath?

“Psychopaths are con artists, deceivers and manipulators who can also be highly intelligent and effective. They know the difference between right and wrong, but they don’t care. It doesn’t apply to them.”

Scientists suggest that this is in fact a deficiency in the development of certain areas of the brain. “They learn to mimic feelings as a way of getting along, but they don’t seem to actually feel them.”

But as one psychologist tells Ronson, if you are bothered at the thought of scoring high, then don’t worry. You’re not a psychopath.”

So are you a psychopath?

Well, as noted above, if you care one way or the other, than the answer is no, but it certainly gives us food for thought.  And I don’t think that self-diagnosis is a good idea either.

However, I do find the whole subject fascinating and find myself pondering such questions as:

Are leaders who are charismatic, competitive, and work-obsessed also psychopaths?

Are psychopaths drawn to be leaders or does being in a leadership position bring out their psychotic tendencies?

How many of our political, religious and business leaders are actually psychopaths?